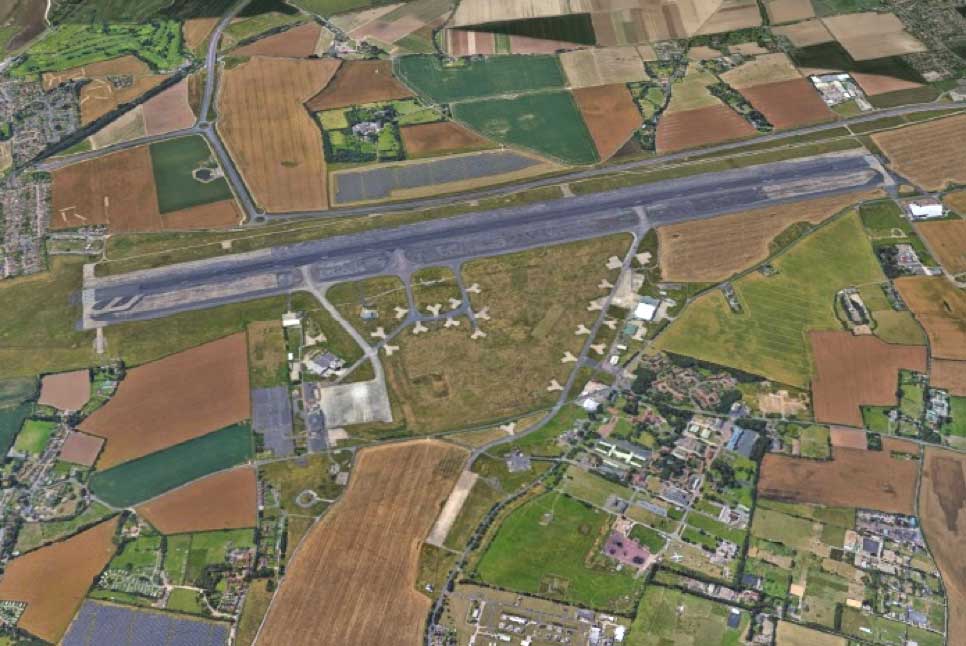 The long-running saga of the proposed freight hub at Manston Airport continues despite the Government’s decision to grant the Development Consent Order (DCO) against the recommendations of the Planning Inspectorate. Riveroak Strategic Partners (RSP) is planning to invest some £300m in the development which it claims will create over 23,000 jobs in East Kent and the wider economy by its 20th year of operation.

Will it ever be commercially viable ?

But despite the go-ahead, there are fundamental question marks about Manston’s commercial viability, which was not assessed or taken into account either in the Government’s decision nor in the Planning Inspectorate’s analysis. The key disadvantage of Manston is its remote location in the far south east of the UK, which increases the time and cost of onward trucking within the country. This is particularly important for perishable items and it is not surprising that many of the larger supermarket chains have their main distribution centres in the ‘Golden Triangle’ within the East Midlands.

The scale of the project is ambitious, but this was necessary in order to warrant consideration for a DCO. As an aviation economist, I can safely say that Manston, irrespective of the level of investment funding, will never attain the cargo throughput to make the hub financially viable, which RSP say is between 150,000 – 200,000 tonnes per annum.

This would represent nearly a quarter of all dedicated freighter traffic in the UK in 2019. Growth in this market in the UK has been virtually static over the past decade (an increase of just 0.8% pa between 2010 and 2019) and, whilst there has been some improvement in dedicated freighter traffic during the Covid-19 pandemic, this growth is likely to be short-term once the passenger market recovers. The reality is that air freight is often carried more cost-effectively as bellyhold cargo on passenger aircraft rather than in dedicated freighters. Furthermore, the future demand for air freight will be constrained by increasing costs as the aviation sector endeavours to meet its climate change commitments.

Over 84% of the UK’s dedicated freighter traffic is focused on three hubs at Heathrow, East Midlands and Stansted airports, where the main freight consolidators, Fedex, UPS and DHL, have their main bases. There is no reason to suppose that they would abandon these in favour of Manston. Whilst it is recognised that there can be slot constraints at these airports at certain times , there are other centrally-located airports such as Birmingham and Doncaster Sheffield which would be preferable to Manston. Furthermore, and of crucial importance, these airports have no night flight constraints, whereas RSP has committed to no night flights at the proposed Manston hub. Night flights represent nearly one half of all dedicated cargo flights and are particularly important for perishables and other fast-moving consumer goods (FMCGs).

It is difficult to see how Manston will now suddenly be able to attract cargo airlines to the airport when its previous owner, Infratil, were unable to do so. Whilst some investment will be necessary to make the airport operational, this would not dramatically change this position. Other airports handling freight traffic already have up-to-date facilities with available capacity in place. Any investment in Manston would be unlikely to give it any competitive advantage.

Similar considerations apply for possible passenger flights at Manston, although these would be on a smaller scale than dedicated freighter traffic. There was an attempt to introduce passenger flights in the 1990s, when the then-owner, Planestation, established its own home-based airline, EUJet, at the airport, although this was short-lived. A new rail station at Thanet Parkway has recently been given the go-ahead by Kent County Council but although this is relatively close, passengers would still need to be bussed to the airport. The reality is that nearly all smaller regional airports in the UK were losing money even before the Covid-19 pandemic, so it is difficult to see how Manston might be any different.

The decision to proceed with the development has split those living in East Kent, which has one of the highest unemployment rates in the UK. On the one hand, some residents support the proposals due to the significant level of jobs that the developer, Riveroak Strategic Partners (RSP) claim would be created.

RSP seem now to be backtracking on this by saying that they would not be as high as they originally stated and were assessed by the Government and the Planning Inspectorate due to automation. It is difficult to understand why this was not considered in the first instance. Many local residents are concerned about aircraft noise, particularly if night flights were ever to be introduced and about the impact of the development on climate change. RSP has recently indicated that it is in discussions with the Port of London Authority (PLA) about the use of electric barges, whereby freight arriving at Manston is trucked to the Port of Ramsgate, transferred onto electric barges to sail round the Thames and into London. Whilst technically this might perhaps reduce carbon emissions, it clearly would significantly increase transit times and costs in comparison to a direct road journey. Whilst it should be expected that all air freight and any subsequent trucking will need to comply with the UK’s Net Zero carbon commitments in the future, the electric barge scheme is unlikely to be commercially viable.

A local resident has launched an appeal against the Government’s decision in the High Court following a Crowdfunding campaign, although this can only be overturned on the basis that the Secretary of State failed to adopt the correct procedures rather than on the merits or dismerits of the freight hub itself. A judicial review has now been granted, although a date for this has not yet been set.

What are the motives of RSP and Stone Hill Park ?

If a major freight hub at Manston is not commercially viable, as is predicted by all industry experts, then we need to look at the motives of RSP and of Stone Hill Park, who originally sold the site to RSP, reportedly for £16.5m. It is important to appreciate that the only commercial value at Manston is in the sale of the land, ideally for residential housing but, on a secondary level, for industrial development. This, however, must largely be seen as a longer-term strategy as the site is not designated for housing in Thanet District Council’s Local Plan, which may have prompted Stone Hill Park to sell the site to RSP. We do not know the precise details of this sale, but it seems hard to believe that in the event of any future land sales, Stone Hill Park would get no financial payback.

If the Appeal is unsuccessful, in the short-to-medium term RSP may attempt to set up some cargo operations at Manston, but these would be very limited, particularly without any night flights which were a vital component of its modest levels of traffic prior to its closure. It may try to seek investment, including Government grants, for industrial development on part of the site on the basis that this would qualify as ‘enabling development’, although this would not significantly increase traffic levels at the airport. So for RSP and its financial backers, it is a waiting game until it is clearly demonstrated that the airport will never be commercially viable and that residential housing and/or industrial development is the only alternative. If the Appeal is successful, then the airport development would not proceed and again it is a waiting game until the site can be redeveloped. Either way, it would appear that, as the owners of the site and the beneficiaries of any future land sales, RSP may be in a ‘win-win’ situation.

So where does this leave local residents in Ramsgate and in East Kent ? Whilst it is possible that, if the Appeal is unsuccessful, a small number of jobs could be created in the short-term, it is unlikely that the airport would ever require more than the 150 staff it employed when it closed in 2014. There is likely to be a continuing fear of the possibility of reintroducing night flights and climate change concerns will not vanish away.

Whatever the outcome, the Government, Thanet District Council and Kent County Council will need to look very carefully at the way forward in the best interests of local residents and the wider UK economy.

BGL CommunicationsManston Airport – A win-win scenario for the developer but not for East Kent?10.30.2020