With a seeming endless series of humanitarian and emergency crisis throughout the world, it is important to acknowledge the key role played by the aviation sector in transporting relief supplies and humanitanian aid workers to often remote locations.

Specialist humanitarian air services are essential where road access to the critical areas is poor or where there are no alternative commercial airlines.  The options in terms of the type and size of aircraft (or helicopter) used may be restricted by the airport or airfield runway length and by aircraft availability within the charter market.  Sudden emergencies can often increase the prices of chartering appropriate aircraft types. 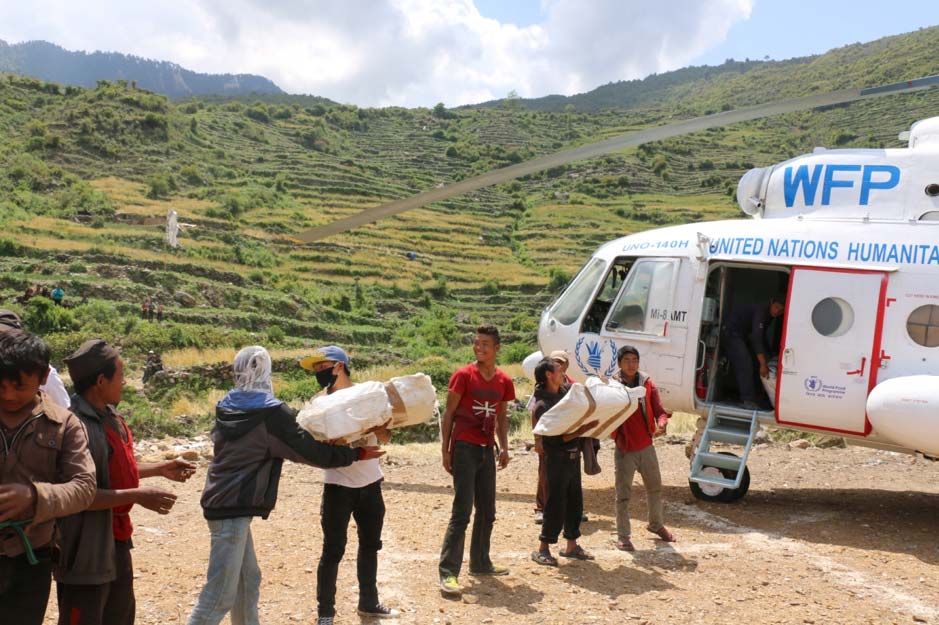 On behalf of the United Nations, WFP Aviation manages a fleet of chartered aircraft for both ad-hoc humanitarian operations, including air drops and for the UNHAS service which provides a semi-scheduled flights for both humanitarian workers and relief supplies. In 2017, UNHAS transported about 300,000 aid workers, donors and journalists alongside 2,700 mt of humanitarian cargo to 286 destinations in 15 country operations. Additionally, 1,580 evacuations were carried out during this year. UNHAS charters aircraft from pre-vetted operators, who must not only meet ICAO operating standards but also satisfy WFP Aviation audit and monitoring requirements.

The service is mainly donor financed by the USA, the UN Central Emergency Response Fund (CERF), the European Commission and national governments, with the balance funded through cost-recovery by charging all users a fee, typically US100-500 per flight.

UNHAS is largely user-driven by the main aid agencies in conjunction with the local office of OCHA (the United Nations Coordination Office for Humanitarian Assistance) and suitable flight schedules are devised to meet user requirements. 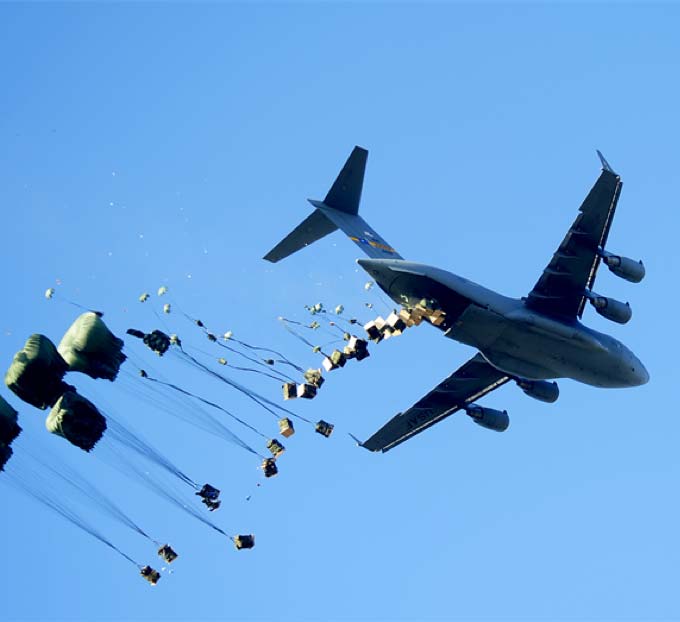 Air drops of humanitarian relief supplies can be used as a last resort, but there are risks

WFP Aviation also undertakes air drops of relief supplies, although these can be complex and dangerous in a conflect zone. Air drops normally require a large clearing area and logistical support on the ground to collect and distribute the relief supplies.    In 2017, high altitude air drops were deployed to a besieged city, Dier Ezzor, in Syria for several months.  Air drops to other besieged areas in Syria, however, were not feasible due to the potential risks to aircraft flying across rebel-held areas.

The European Commission funds two humanitarian air services, ECHO Flight in DR Congo, Kenya, Mali and Uganda and the EU Flight in Somalia.  ECHO Flight, which is managed by the EC’s DG ECHO (Directorate-General for European Civil Protection and Humanitarian Aid) charters six aircraft (two DH Dash 8-100s and four Cessna Grand Caravans) from DAC Aviation, a Kenyan-based charter operator with its main headquarters in Canada.  The EU Flight provides services between Nairobi in Kenya to and within Somalia.  Both services focus primarily on passenger traffic although some smaller relief supplies are also carried.  ECHO Flight is a free service for all aid workers although priority is given to those working on EU-funded humanitarian projects. The EU Flight is managed by the EC’s DG DEVCO (Directorate-General for International Cooperation and Development) with priority for staff working on EU-funded development projects.

Other humanitarian air services include those funded by Mission Aviation Fellowship (MAF) and by ICRC (the International Committee for the Red Cross).  MAF is a Christian-based charity which was originally established in the US in 1946.  The service globally has around 59 light aircraft serving in 27 countries. In 2017. MAF carried some 77,657 passengers and 2,149 tonnes of cargo to some 639 destinations in sub-Saharan Africa, SE Asia and Australasia. The funding for the service (US$35.3m in 2017) is raised by a combination of donations from major institutions, trusts and individuals.

ICRC manages its own air service for medical evacuations and for the transportation of medical staff. equipment and supplies to disaster or other crisis areas.  In 2017 it carried 60,920 passengers and 10,872 tonnes of cargo using a fleet of 21 aircraft.  Flights in some countries are also carried out on behalf of WFP and MSF (Médecins Sans Frontières).

Given the nature of their operation, all humanitarian air operators must play strong attention to aviation safety and security. Most aircraft used are fitted with the latest technologies including a satellite tracking system, TCAS (Traffic Collision Avoidance System)II and EGPWS (Enhanced Ground Proximity Warning System).  Nevertheless, there are still potential dangers, particularly at remote airstrips subject to runway incursions from wild animals or as a result of adverse weather conditions. All accidents and incidents are fully reported and investigated, where possible on a ‘no-fault’ basis so that problems can be fixed rather than offenders punished.  In some cases, a small budget may be available eg through the UN’s Department of Field Support (DFS) to improve airfield infrastructure and ground equipment. This can often be cost-effective as it may enable larger aircraft types with a lower ‘per passenger’ cost to use the airfield.  Aviation security may also be a problem in some conflict zones and there have been some instances of kidnapping of flight crew.

One difficulty faced by the sector is the lack of more recent and cost-effective aircraft types suitable for humanitarian air services.  Many operators use older aircraft types such as the DH Dash 8-100, which are now approaching the end of their useful life.

Recently, however, DAC Aviation has signed a lease agreement with the Stellwagon Group for four Airbus C-295 twin-turboprop aircraft for use in their humanitarian operations in Africa and Afganistan.  Primarily designed for military transport and surveillance, the C-295 is highly suitable for operations on short and unimproved runways.

In the longer-term, new technologies such as drones will be used for humanitarian relief eg for mapping purposes after a major natural disaster or for the delivery of small-scale items such as medicines. Whilst their use is still in its infancy, UNICEF has recently sponsored a project in Malawi to set up a special airspace corridor for the testing of drone-related activities for humanitarian relief.  There have even been proposals for the development of edible drones, partially constructed out of foodstuffs such as pasta or honeycomb, although this is unlikely to be practible in the short-term.

Given the scale of humanitarian crises across the world, it seem certain that specialist air services will be required for many years ahead.  It has been suggested that the UN should consolidate the aviation activities of its peacekeeping forces with those of WFP Aviation/UNHAS.  But whilst this might result in some cost-saving and improved coordination, it would undoubtably be resisted by the humanitarian community who generally wish to disassociate themselves from any military connections.  Furthermore it could perhaps jeopordise funding from certain donors.

There are certainly challenges ahead. With potentially millions of human lives at stake, it is essential that safe and cost-effective air transport can be provided to meet the needs of the humanitarian aid community and those they support.