To minimise the risk of transmission during the Covid-19 pandemic and to restore passenger confidence in flying, it is important that ICAO, as the global aviation regulator, sets common standards for appropriate measures for passengers and crew onboard flights and for transiting through airports. But what are the parameters for assessing and implementing these and what might be the implications for the industry as a whole? 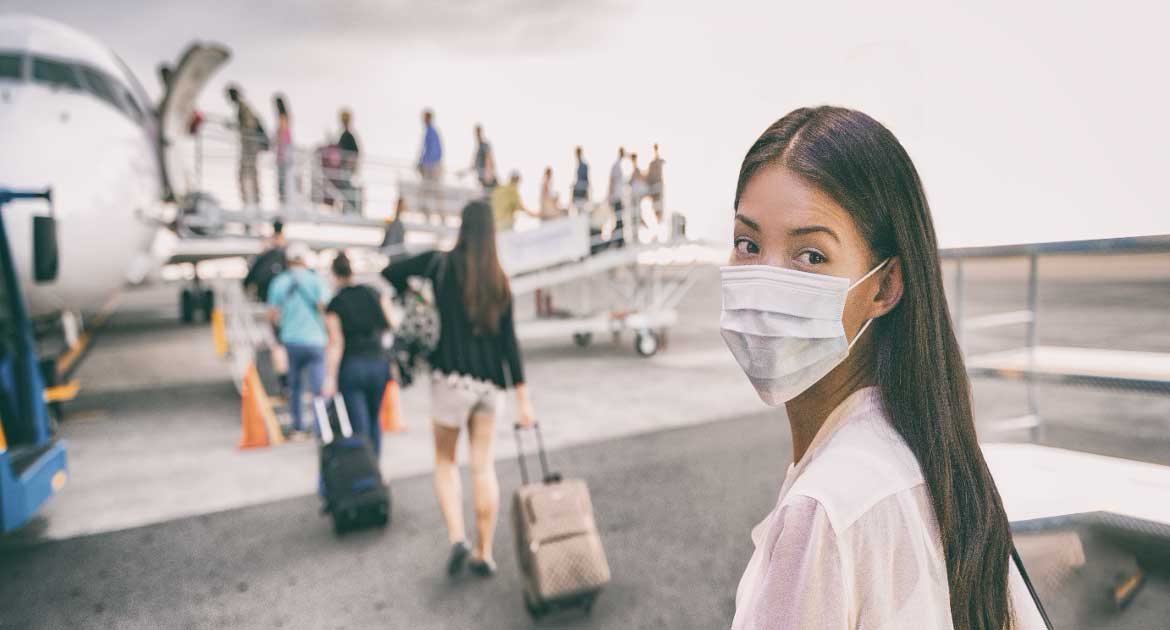 Guided by the medical evidence

The first point to stress is that all measures and standards of operation for aviation must be guided by the medical evidence. This is the case for how we get out of Covid-19 lockdown for all work and social activities – not just aviation. The medical evidence is, of course, evolving quickly but often this can be contradictory. It is not clear for example as to whether the two metre social distancing rule can be reduced without any significant increase in the risk of transmission of the virus A government health advisor in the UK, Professor Robert Dingwall from Nottingham Trent University has indicated that there is a fairly solid evidence base for a an unsafe transmission rate if indoors and within one metre of someone with a respiratory infection for 15 minutes. This would suggest that, even with the middle seats vacant on aircraft, flights may not be entirely risk-free. Nor it is clear whether the health testing of passengers prior to flying is appropriate. The medical evidence is further complicated by the reliability of any tests that might be required for air travel with temperature checks unable to pick up asymptomatic cases and rapid blood checks have so far not proved to be sufficiently reliable.

What measures have so far been introduced on those flights currently being operated?

Many airlines in the US including Delta, American and Spirit Airlines have already blocked off the middle seats for most, if not all, of their flights. The European low-cost airline, easyJet, has indicated that it will do the same in the short-term once flights resume. Ryanair, however, opposes this preferring temperature checks at departure airports as the primary measure for reducing infection. Of course, middle seats are generally the least preferred on the aircraft and, in the short-term, load factors are likely to be relatively low, so the potential loss of revenue may not be very significant for some airlines. Some relaxation of the middle seat rule might also apply for families travelling together. It is also likely that the risk increases not only by the physical distance between passengers but also by the duration of the flight.

Many US domestic and airlines operating in China and SE Asia require all passengers to wear face masks. This initiative, led by jetBlue, whose CEO defines this as the ‘new flying etiquette’ has also been followed by other US airlines including Delta, United, Alaska, Southwest American and Frontier.

Other in-flight procedures adopted by US airlines include the provision of disinfectant wipes for all passengers and deep cleans between flights and overnight. There have been suggestions that, in the immediate future, all bags should be checked in free, thereby limiting passenger interaction loading overhead lockers. At present, all these measures are at the discretion of individual airlines – although clearly at present they need to demonstrate to passengers that the flights are as safe as practically possible. A key concern is how long airlines are prepared to operate in this way, particularly with potentially unprofitable load factors. There may be a strong temptation to relax these measures, particularly if the public starts to tire of social distancing.

Several US airlines have adopted revised boarding procedures to minimise interactions between passengers. This is certainly feasible where airports are operating limited flight schedules but they may be more problematic if flights need rapid boarding to meet ontime departure slots. Longer boarding times are an inevitable outcome as long as social distancing is necessary during the pandemic.

How safe are airports? 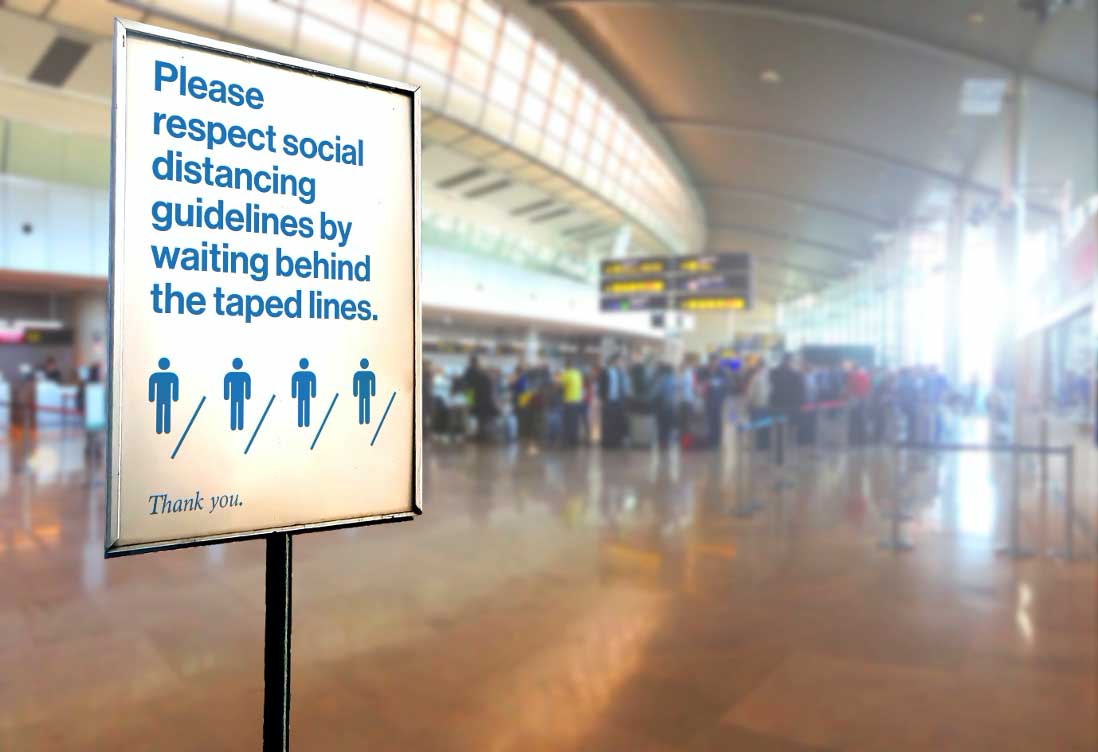 Airports in China, Italy and the US are amongst those introducing temperature checks together with self-administered questionnaires for all departure passengers. Methods include full-body infrared scanners (which measure skin temperature as a proxy for core body temperature), handheld infrared thermometers and ear gun thermometers. Heathrow is pressing for all UK and indeed all airports worldwide to introduce temperature checks, although the UK government has not so far specified this as a mandatory requirement. Gatwick has indicated that it is evaluating various options, including temperature checks, but it appears to prefer some type of pre-check before travel carried out by the passenger’s GP or at a pharmacy. This would effectively provide a ‘health passport’ for the trip. One regional UK airport. Bournemouth, is installing tripod mounted thermal ‘fever-detection’ cameras at all entry points to the airport terminal to alert security guards to potentially infectious passengers. However, with Covid-19’s incubation period of up to 14 days and many cases asymptomatic, the evidence for the effectiveness of thermal screening at airports is limited. The London School of Hygiene & Tropical Medicine estimates that using thermal checks only one in five coronavirus-infected passengers can be detected at the airport. Nevertheless, despite these limitations, thermal temperature checks at airports may still form part of a package of measure designed to reduce the infection risk.

Emirates, in conjunction with the Dubai Health Authority, has trialled a rapid blood test for the virus for all passengers. The tests, which were carried out on all passengers on a B777-300ER flight from Dubai to Tunis were undertaken near the check-in area, with results available with 10 minutes. But as with temperature checks, there are still some doubts about the efficiency of such rapid tests and the overall scalability of conducting these for all flights at major airports.

Regardless of either temperature checks and/or blood tests, airports will still need to adopt physical distancing measures in all key operational and passenger processing areas, including security, gate lounges, baggage reclaim and immigration.

This will present major challenges particularly at larger airports where flight schedules may need to be revised to limit passenger throughput at peak times. Manchester Airport has adopted a two metre ‘social distancing’ rule throughout the airport which is reinforced by floor markings and other signage, although other international airports, have reduced this to 1.5 metres. At present, these measures are manageable, although there are doubts on their feasibility at peak periods as traffic levels increase. Crowding in baggage reclaim can be a particular problem. To limit this, Manchester Airport sometimes holds aircraft on the ground on arrival before allowing passengers to enter the terminal.

Protection of airline and airport staff

Whilst much of the focus has been on ensuring the health of passengers during the pandemic, it is important not to forget front-line airline and airport staff who have significant physical interaction with passengers or with each other. Passengers on BA’s long-haul flights are now handed their packed meal and a drink when they board the aircraft rather than be served by the cabin crew. Many airline staff are transported around airports in buses and there have been calls to limit the number of passengers or increase the size of the buses to improve social distancing. Ground handling staff often work in close proximity to each other and need to ensure they are adequately protected. IATA and ACI have been helpfully providing guidance to their airline and airport members on appropriate operational measures for airline and airport staff during the pandemic, although ultimately the responsibility for implementing these rests with individual airports and airlines rather than as a mandatory government requirement or one imposed directly by an international aviation organisation.

ICAO, as the global international regulator, is taking a keen interest in assessing strategic priorities for airlines and airports during the Covid-19 pandemic and has recently established an Aviation Recovery Task Force, with representatives from IATA, ACI, the World Health Organisation and the World Tourism Association. The Task Force has agreed to provide its initial recommendations by the end of May. In the case of previous pandemics and similar health-related events impacting commercial aviation, ICAO has stipulated that national governments should define the relevant measures or health checks required for safe operations within their own jurisdictions. This may have some advantages in that the health risks may vary from country to country. However, in the case of the Covid-19 pandemic this is leading to a mishmash of different measures introduced by airlines and airports worldwide. Should ICAO now lead from the front with some specific unambiguous requirements, such as the compulsory wearing of face masks or the acceptable aircraft seating configurations which are mandatory for all flights worldwide?

The recovery of the aviation industry has many challenges ahead, but this may perhaps help to instil confidence in flying to the travelling public.