Balancing the needs of aviation and the housing sectors

The UK’s general aviation sector provides some £3.0 bn GVA (Gross Added Value) to the economy – but with increasing pressure on local authorities to find suitable sites to meet the Government’s housing targets, many smaller general aviation are under threat of closure.  Currently, all airfields are regarded as brownfield sites, which have priority status for development, although the existing policy in the National Planning Policy Framework (NPPF) is currently under review by the Ministry of Housing, Communities and Local Government in conjunction with the Department for Transport.

Most general aviation airfield can break even through a range of aeronautical and non-aeronautical revenue streams, although funding for new infrastructure is often prohibitive.  With its land value as housing considerably in excess of that as an ongoing airfield, it is not surprising the many privately-owned airfields are under threat.    General aviation has at best been static in the UK over the past 10 years, although there are some growth areas including flight experience flights, microlights and home-built aircraft.  Larger airfields with the appropriate facilities attract the more profitable corporate aircraft, dependent on their location in relation to major conurbations.   There is however considerable competition to attract corporate aviation, although peak time slots at many larger airports are scarce and expensive.   As such, many smaller airfields must rely on flight training and privately-owned based aircraft to survive, coupled with any additional revenue from hangarage, the cafe and from any small businesses based on the site.   In addition, many small airfields support the local community through a variety of activities ranging from Sunday markets through to acting as a base for the helicopter emergency services (HEMS).

At least ten UK airfields have either recently closed or are under imminent danger.  These include Andrewsfield, Fairoaks, Long Marston, Manston, Netherthorpe, Plymouth, Redhill, Panshangar and Wellesbourne.    Manston Airport closed in 2011, when it was purchased by Lothian Shelf 718, a property company with plans for a mixed use development including 2,500 new homes.  This, however, is being contested by RiverOak Strategic Partners, who have applied for a Development Consent Order (DCO) to compulsory purchase and reopen Manston as a major freight airport with some passenger services and GA use.   Plymouth Airport has been mothballed since 2012 but it is protected under the Local Plan.  The current owners, Sutton Harbour Holdings have prepared a masterplan for mixed use development, although this is challenged by a community group, FlyPlymouth, seeking to reopen the airport.  Fairoaks Airfield in Surrey faces redevelopment as a Garden Village with some 1,000 new ‘eco-friendly’ houses.

Redhill Airport is not under immediate threat, but is safeguarded under the local council’s Development Management Plan for new housing after 2027.   Panshangar Airfield near Welwyn closed in 2014 following the expiry of its lease and the owner has submitted a Planning Application for some 650 homes. Two rival groups however have prepared proposals to relocate the grass runway and clubhouse so that aviation can be retained on the site.   Wellesbourne Airfield is the subject of a dispute between the owners, who wish to develop the site, the local planning authority, Stratford District Council and the airfield, which is one of the busiest GA airfields in the UK.  A number of on-site businesses have not had their leases renewed and will be forced to leave the airfield.  Whilst this has been upheld through a court hearing, the business tenants have recently been granted leave to appeal against this decision. 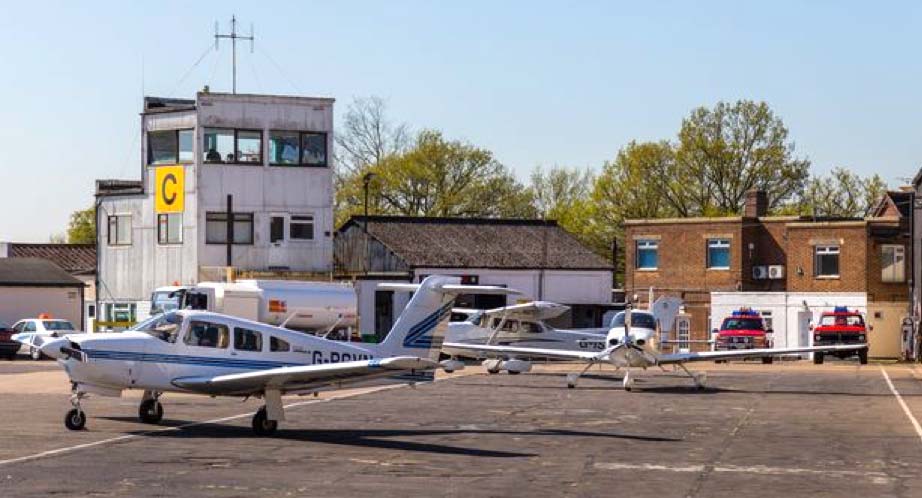 It is clear that some airfields under threat of closure may be fighting a losing battle.   Nevertheless, the economic and social benefits from general aviation demand that some protective status is required.

The All Party Parliamentary Committee for General Aviation, chaired by the former Conservative minister, Grant Shapps, himself a private pilot, has been particularly active in lobbying Government to prevent any further decline in the sector.

The new guru for GA appointed by the Department for Transport, Byron Davies, has commissioned a study to examine whether a network of commercially-viable GA airfields should have protected status under the NPPF, although there would doubtless be some debate as to which airfields are included in the list.

Balancing the economic and social benefits of general aviation with commercial and housing priorities is a key challenge for both the sector and for government. By adopting a pro-active approach to the extent and nature of the airfield infrastructure required, it is possible to protect the interests of all stakeholders.